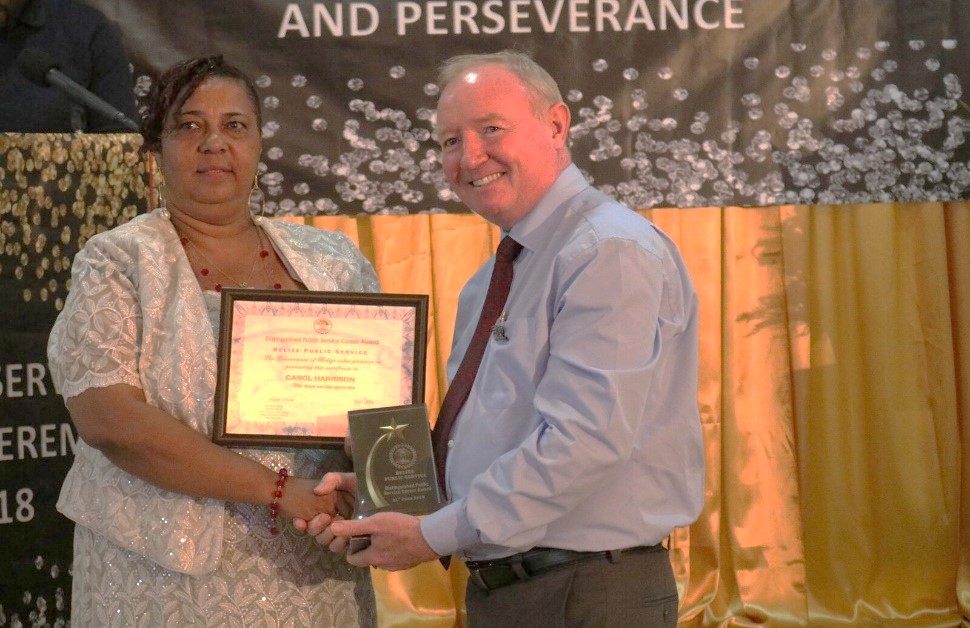 Carrol Harrison has been working in the Public Service for more than 32 years, and from the very inception she exemplified a level of commitment to the people and country of Belize.  Like many others Carol's public service career stated from humble beginnings and as a typist at the Belmopan Police Training School.   That experience molded her to become a very responsible and disciplined public officer who adhered to principles of punctuality, integrity and respect and which reflected her as a positive role model to fellow public officers.  Over the years Carol has grown both personally and professionally and as a result of continuously developing herself and the people around her, she is today a Senior Finance Officer.

On the Journey, Carol has worked both at home and abroad, where she was instrumental in the reorganizing and improvements of revenue collection systems to bring about more financial accountability of public funds. She has worked in several ministries and departments, namely the Housing Department, the Police Department, the Ministry of Foreign Affairs, at embassies both at home and abroad, and more recently at the Ministry of Health at the Belmopan Hospital. Additionally, Carol was a part of a team which led to increased salaries and amnesty for public officers.  Today, despite personal health challenges that Carol has been facing recently, as a God fearing person she continue to serve her country and people.

Police Constables Derwin Garcia and Daniel Choc, both of the San Ignacio Police Formation, were recognized for their bravery in the line of duty.  On 29th July 2017, a stress call of young boys being trapped in the Cristo Rey River, saw these officers quickly responding and saving the lives of 3 Belizean youths.

PC Garcia and Choc, truly acted as heroes when with not more than a piece of rope, the three youths who were all unable to swim, and trapped upstream in current, put their own lives on the line to bring the scared but very tankful youths to safety. 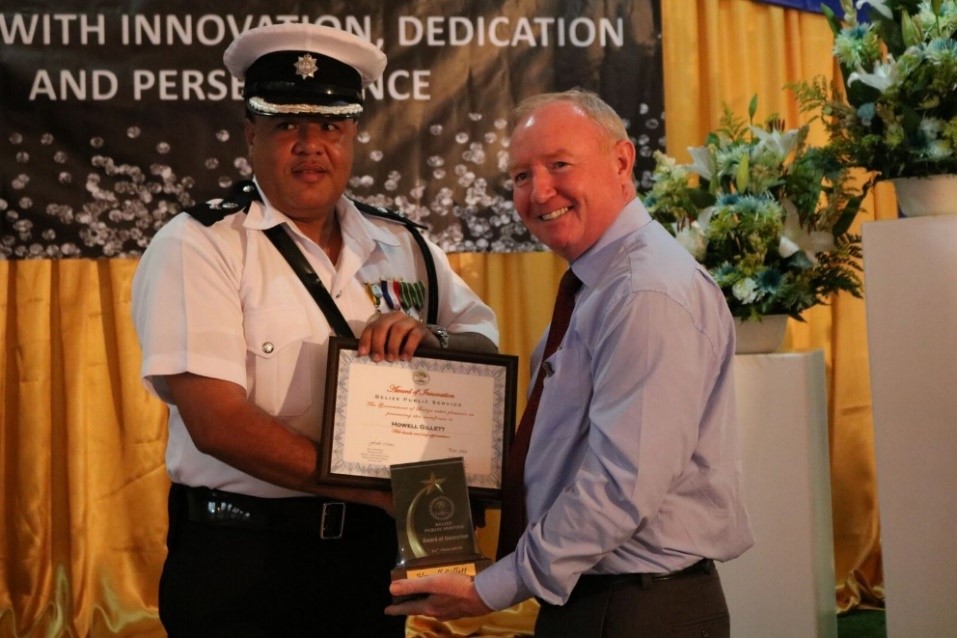 What may appear to be quite simple, has revolutionized how the Police is communication and getting assistance to fight crime.  Senior Superintendent of Police, Howell Gillett has been an active member of the Belize Police Department for the past 25 years and has continuously made efforts to improve himself, the relationship between the community and the police and overall the work of the Police Department. From one of his international training he made observations of the simple use of the communication application, WhatsApp by police offices in their daily functions and the difference it made.

Gillet, therefore started what is general known in Belmopan City as the “Neighborhood WhatsApp group,” and consisting of both police officers and civilians which is to inform the community of what is going on with crimes in the city, and vice versa for citizen to have access to the police from via a not so traditional option.  Today this initiative has resulted in the police being instantly informed of crimes that are in progress and quick apprehension of criminals.  The initiative has since been replicated all over the country with membership growing and fighting crime has become everybody’s business. 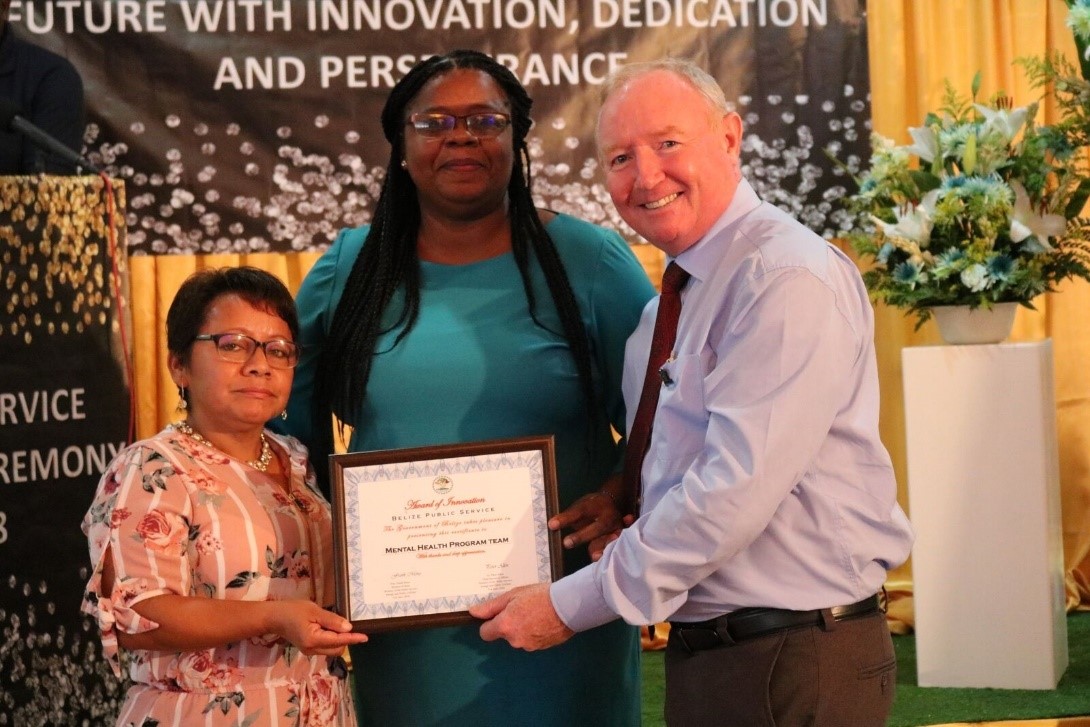 Under the direction of a Nursing Administrator, the Mental Health Program which is complimented by a mere 13 psychiatric nurse practitioners to serve across the various regions, is innovatively serving clients on a daily basis.  As with many other state-owned agencies, resources are scarce, however the limitations of scarce resources have not stopped the ingenious strategies of administrator and her team to find whatever is needed to carry out necessary workshops and maintaining motivation and drive among staff to carry out their work of promoting mental health and self-care.  The Mental Health Program continues to see increasing clients accessing and above all smiling faces from those among us who are often neglected and ignored. 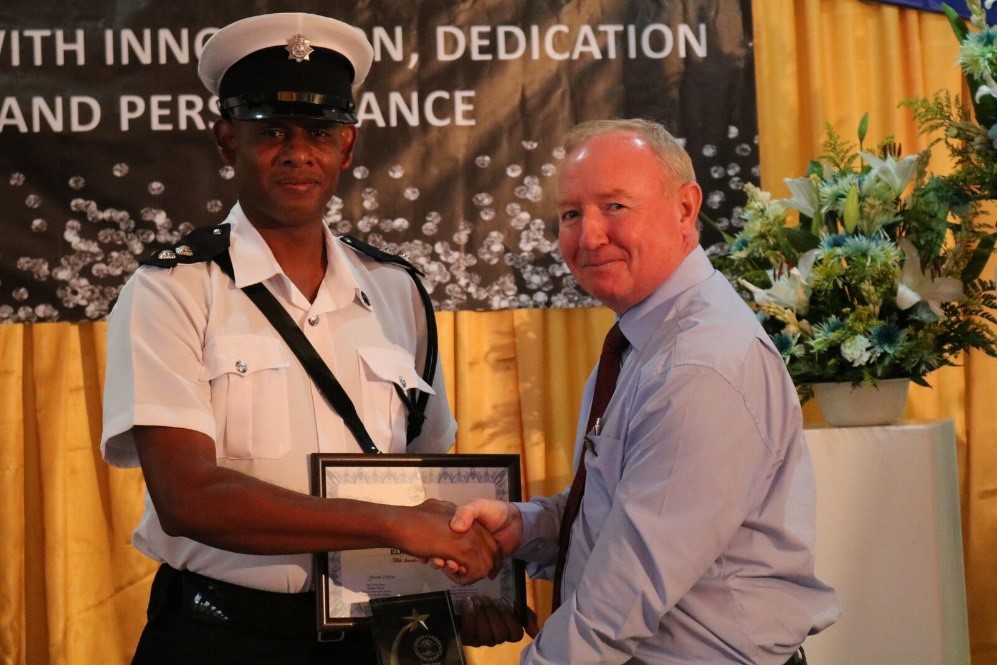 Elroy Carcamo, Inspector of Police has been in the Belize Police Department for the past 16 years. His passion for building trust with the communities drove to the formulation of one of the largest Police Youth Cadet group in Belize which became very popular because of its discipline and exemplary performance in basic foot drills display.

Inspector Carcamo’s dedication to working with youths and the community gave him the opportunity to become the first Police Youth Cadet Corp National Coordinator. During the period he formulated the first police youth cadet Corp Foot drill competition, which was theoretically and practically evident as included in the program was a revised handbook for the BPYCC and a newly designed electronic recording system to track cadet funds for accountability and transparency. Inspector Carcamo further advocated and succeeded in having the sport camp for Cadets move to a regional and national scale where some 1300 youths across the country participated in competitions.

NOMINATIONS ARE OPEN FOR 2021!